Our History and Beyond.

Emmett’s brainchild and founder, Andy Burns, first got a taste for the craft beer scene while at Marquette University. In the heart of Milwaukee (Brew City) Andy worked summers as a carpenter’s assistant. After a long day’s work with his boss, Jim, the two would unload their work truck and pop open one of Jim’s home brews. Andy was hooked. With a trip to the local home brew shop, he studied up and started crafting his own beer at home.

After college, Andy served in the Marine Corps, flying reconnaissance drones while his home brew gear collected dust. While training on the west coast, Andy witnessed the boom of craft beer. He lapped it up, marveling at the diversity of beers and breweries on the coast. It dawned on him: Back home in Chicago, craft beer was practically non-existent. Andy met with craft brewery owners, sat front row at brewing seminars, and owned his calling: to pioneer craft beer in Chicagoland.

On Main Street in West Dundee, Illinois, sits the Hunt’s Block building: a fixture in the National Register of Historic Places and home to the first Emmett’s Brewing Co. In 1998, Andy, his family, and a group of investors bought the building, renovated, and set up shop serving hand-crafted food and award-winning beer. The craft brewery is named for Emmett Burns, Andy’s grandfather and the Burns family patriarch. Rooted in values of hard work, self reliance, and integrity, Emmett’s Brewery is a tribute to its namesake.

World-class Beer Down the Street

Since Hunt’s Block, Emmett’s has opened three more locations: Downers Grove, Palatine, and Wheaton. Andy and his team of brewers craft world-class beer right in Chicago’s own back yard. It’s locals brewing for locals, neighbors serving neighbors, and lovers of great beer and food gathering just down the street to revel in good times. Now Emmett’s is bottling its beer, so you can enjoy a locally-brewed six-pack at home. 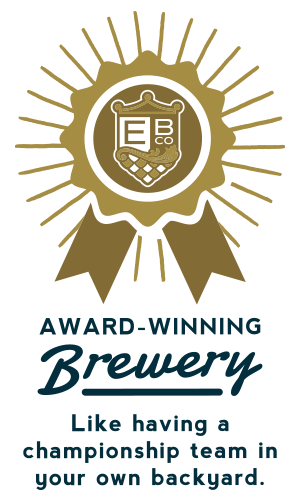